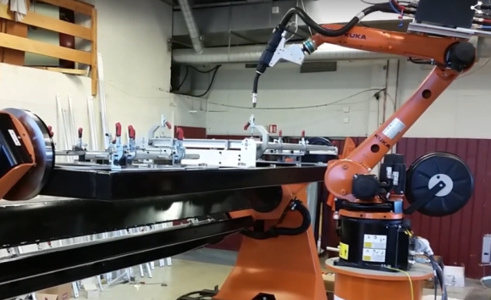 CEO Sten Kåre Bergman in Aluhak Systems called Allinvent. He got a new idea and needs help to get it realized.

For over 30 years, Aluhak has been producing scaffolding and scaffolding equipment for use in the oil and gas industry, construction and the private market. The company's head office is located in Klepp in Rogaland, and in addition they have branches in Trondheim, Bergen and Oslo. Aluminum is used in production. The aluminum products compete with steel scaffolding on weight and corrosion. This is important, not at least offshore. With its low dead weight, unique strength properties and long service life, aluminum is a unique material for use in the production and development of scaffolding.

The downturn and the future

- For us at Aluhak, things were going smoothly from the day we started in 1987 until 2014, Bergman says. But in 2014, it was as if someone turned off the light, he says. The oil downturn hit us hard, and we had to rethink. To survive, we had to make drastic changes in the way we produced, and costs had to be forced down.

- The downturn in the oil industry made us decide to develop for the future, Bergmann explains. We made a plan to find ways to automate production. Could we use better and smarter technology to make things as rational as possible? We also thought that automation would cost the same in Poland as in Norway. The idea of moving production home to Norway began to become more and more attractive. And it is no secret that the market we are in responds positively to the fact that things are produced in Norway.

The plan for Aluhak was good. They wanted to move production back to Norway. They wanted to focus on automation and smarter methods. The goal was a safe, Norwegian, resource-friendly production with top quality. But then there was this thing about getting everything back on track, then. It's not just about wanting automation, reading a bit online and pressing a few buttons.

Bergman and his colleagues realized that they needed help from someone who had expertise. This is where Allinvent came into the picture.

- After looking closely at the production in Aluhak, we suggested that they could use an advanced welding robot together with a specially developed jig system, says Åsmund Voster in Allinvent. Aluhak thought this was a good idea.

But anyone who has been through automation of industrial production knows it´s not just about buying a robot and putting it in a production hall. Everything must be incorporated and managed in the right way.

- We received invaluable support from the people in Allinvent, says Bergman. They delivered something we had no idea about, he admits. Allinvent does not only have cutting-edge expertise in technology. They are also local, and that was quite important in the run-in of the new production line. They could line up at short notice and be an important supporter for us in Aluhak.

With automated production, Aluhak delivers stably and with the quality that the Norwegian market demands. Bergman says that in the long run they want to move the entire production to Norway. Today, Aluhak has annual sales of approximately NOK 130 million.